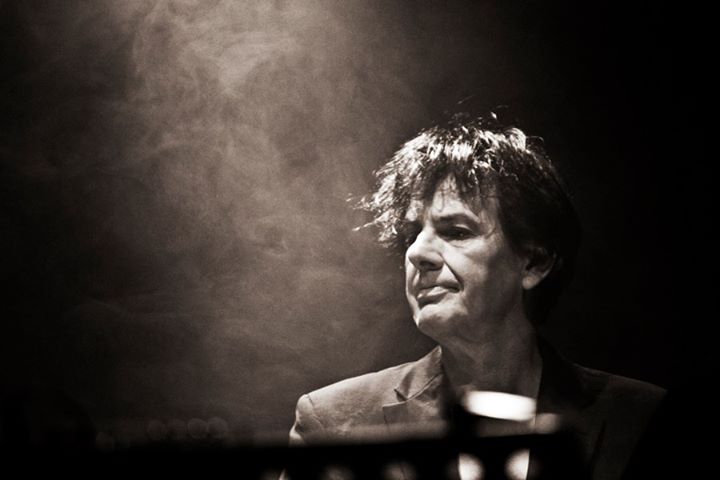 Its was in October 2014, I recall, at band promoter Dolores San Miguel’s book launch upstairs in Melbourne’s Athenaeum Library on Collins Street when I noticed a male figure completely clad in all black. He was grasping a beautiful wooden and brass-headed walking stick. Perched on a chair at the end of some stacked library shelves with his friend the artist Emily Humphries who was sitting on the arm of the chair close to him. It was almost a romantic, period image bathed in a golden haze. Their position looked like something out of a Regency masterpiece. I was enamoured with a splash of curiosity. This was my first introduction to the founding member of the Australian punk rock band JAB and pioneer of synthpop. In the late seventies and the start of the 80s, Wednesday eagerly produced a host of highly creative and affecting music. The famous writing technique of the Beat novelist/drug addict William S. Burroughs’ “cut up technique” inspired Wednesday who played around with tape manipulation and synthesiser experimentation.

Flashback to Adelaide in 1976 Wednesday met the UK born former punk rock singer/songwriter and guitarist, Bohdan Roman Kubiakowski better known as Bodhan X busking in an Adelaide mall. Wednesday enquired about what he was doing with the music. “I’m going to be a superstar. People are just like sheep, they will follow.,” Bodham replied. Wednesday was most impressed and suggested forming some sort of band together.

So, in August, the both of them and Janis Friedenfelds also known as Johnny Crash (later of post punk band “Sacred Cowboys” fame) as drummer and vocalist, they relocated to Melbourne renaming themselves “JAB” formed out of their first initials Apparently, their first show was at St. Kilda’s legendary Seaview Ballroom (Crystal Ballroom) – the first ever gig played at the venue. With Bodham left, the band morphed into the short lived rock band ‘Models’ with singer, guitarist and songwriter Sean Kelly joining the lineup.

Wednesday, was a respected musician who became famous for his distinct versions of Uriah Heap’s “July Morning” and Led Zeppelin’s “Stairway to Heaven.” Over the intervening years, he continued to experiment with music and live performance, releasing occasional singles and then spending 1992 in Germany playing with the flamboyant actress/singer best known for her theatrical vocals – Nina Hagen. Wednesday also pre-produced and programmed her 1995 album, “Bee Happy”.

1997 saw Wednesday included as a touring member, completing several worldwide tours with avant-garde/experimental band  Einstürzende Neubauten  and on many other recordings from their 2004 “Perpetuum Mobile” Tour”. He returned to Australia in 2013, settling in Melbourne continuing his working with many other bands.

In 2013 he was to perform his brilliant solo performance “The Ash Wednesday Effect”, a spontaneously performed audio-visual experience, in which improvised soundscapes triggered entrancing visualisation, which were in turn projected onto the physical form of Wednesday himself. The performances at North Melbourne’s Club Voltaire were continuous three hour compositions, throughout which audiences were free to come and leave as they wished.

This year, after battling a debilitating illness, Wednesday returned with a performance entitled “AfterMATH” which was three new striking and unique works combining electronics with the famous Melbourne Town Hall Organ. The audiences responses ranged from “spooky” to “evocative”, from “majestic” to “spectacular”.

I have managed to catch up with Wednesday numerous times over recent years – sometimes at a soiree, or a launch or the impromptu visit to him. Recently, I was curious about Wednesday’s life and himself, and so I fed my curiosity eagerly and asked:

What did you do before you became a composer/musician?

Listened to a great deal of music. Radio and records. I grew up with the British beat of The Beatles, The Rolling Stones, The Who, The Small Faces, etc. I fell asleep with a transistor radio under my pillow. A little later I discovered the white man blues, the electric sounds of Jimi Hendrix, Cream, Bluesbreakers for example. I was able to trace this thread to Delta and Chicago blues and discovered the essence of contemporary American music in the process.

How did you become a composer/musician?

It was inevitable that I was going to play. Bass guitar looked easy because it only had 4 strings (lol). I had a few lessons which were awkward and unproductive. Learning to read music bored me. I wanted to play not study. An ‘undergroundʼ tutor showed me how to play a 12 bar blues and I was in! I could work out everything from there. I played a lot to records and then with longhaired friends. Practiced scales for countless hours. Became dexterous with the instrument. Taught myself what I needed to know AS I needed to know it. Oh yeah, I had dropped out of school by this time. The stage was set… I later dislodged convention further when I ‘gave upʼ being a musician as such and began experimenting with a reel to reel tape recorder and whatever stage sounds I could conjure up, through whatever means. An analog synthesizer was in the pipeline.

Why do you do the work that you do?

Because Iʼm being true to myself. I have lived in a timeframe where I could find a way around convention. A luxury of sorts. Retrospectively one that I was obliged to pursue.

Which people or what inspires you to work in music?

Some of the people that I have worked with have been an inspiration to me. Initially my dear and departed friend Johnny Crash (the J in the ‘punkʼ group JAB). Apart from being a tremendous drummer, he possessed a synthesiser before I did. He would delight in turning it up really LOUD and creating the wildest sounds youʼve ever heard while laughing his head off. We had so much fun together. Hours and hours of it.

On another tack completely, the individual members of Einstuerzende Neubauten are intriguing characters. The sum of the components (the group) is greater than that of the individual constituents of course. Just being in a rehearsal room with those guys was a privileged experience. Not all of the time, but some of the time an artist or particularly a group of artists are able to produce a form of unique, reciprocal magic with an audience. One which is uplifting for all concerned. This is why we do it I believe, having experienced this ‘entrainmentʼ from both sides.

You have suffered a number of personal setbacks. Do you think these are explored subconsciously in your work?

Not so much. I have enjoyed playing an improvised solo or two with my left hand rather than my right. Naivety in motion.

What do you think have been some of the negatives in your work?

Hmmm…. Models breakup. Apart from that maybe chopping and changing too much for people to follow.

Whatʼs been some of the positives in your work do you think?

Both of the above! Oh no really I would say staying true to ‘a path with a heartʼ. I have always possessed instinctive, unquestionable self-belief.

Whatʼs been your favourite achievements up to this point?

1991: Commercial radio being forced to play Crashlandʼs Boom Boom, a demonic reworking of a John Lee Hooker standard. Released on Regular Records, it was recorded at Sing Sing studio for a sum total of $100 and was way outside standardised quality control for ‘thoseʼ sorts of radio stations. The kids just loved it and voted into the ʼTop Eight at Eightʼ. Kiss No. 1 Crashland No. 2 Aerosmith No.3 ha!

2004: Playing a concert in the former headquarters of the GDR in Berlin with Neubauten. By that stage it was a huge cavernous structure. Two floors of concrete and iron with a 10 second reverb time. Best to listen outside as the building itself became the instrument that we were playing

What are you currently working on?

Having fun with a diminished sense of responsibility.

If you couldnʼt do this anymore, what career path do you think you would have followed Ash?

Thatʼs hard to say. It is only retrospectively that I see a career path. I didnʼt think in those terms.Okay getting back to Boom Boom in 1991. I awoke in a pitch-black room. Through no fault of my own it happened to be my birthday. All I could hear was the radio.The announcer on 3RRR was phone interviewing John Lee Hooker – the man himself. He must have been close on 90 years old. At one point in the interview the announcer proclaimed something like “local band Crashland have been high on our playlist for the past year or so with their reworking of one of your tunes, Boom Boom.” And then she naively asked: “Have you heard it?” JLH of course had no idea whatsoever what she was talking about…. more than a few moments silence… and then he stumbled on the sentence: “‘Err… I wish them all the best!” So… I had awoken from a dream into the real world, where before I had a chance to think the legend was wishing me all the best on my birthday. Ha!

Ash Wednesday is still wonderfully creative and prolific. A ground-breaking pioneer, an icon of Aussie music and an accomplished musician that is as inspirational as ever. We are most lucky to enjoy his unique talents. 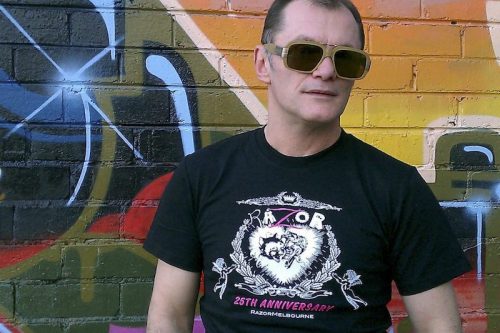 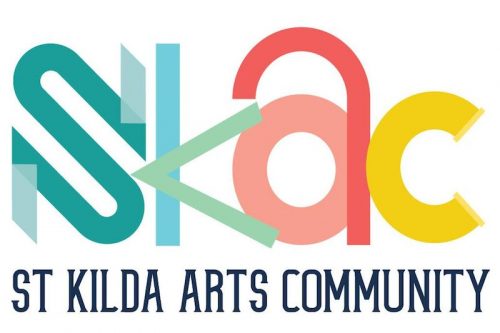